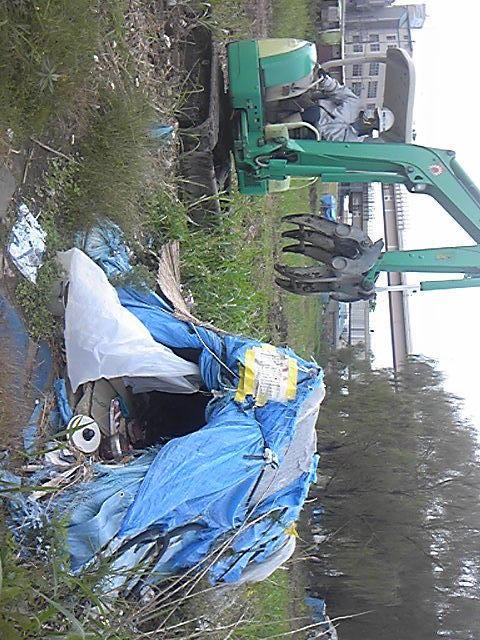 
To whom it may concern:

This letter is to ask your support for the homeless people living on the Arakawa river bank (northern part of the central Tokyo) who are now
facing the threat of forced eviction by the Japanese government.

Across Japan, homeless people have resorted to life in public space, building tents and simple huts covered with plastic sheets to shelter themselves. The Arakawa riverside is one of those spaces that are extremely crucial for the homeless people to survive literally day by day. In August, the Ministry of Land, Infrastructure, Transport and Tourism (MLIT) notified the homeless residing the area to move out of the area without any consensus or even consultation with them. Up until now we have tried to negotiate tenaciously with MLIT; however, in the last meeting MLIT brought police force to intimidate us. Their violent and threatening approach destroys a completely peaceful and democratic process which is our way of resolving the matter. The threats of forced eviction against the homeless are increasing recently in Tokyo: recently, a similar situation occurred in the Shibuya area of centr
al Tokyo. The tense situations still continue in Tatekawa (East central Tokyo) as in our region of Arakawa. To the homeless, public space is pivotal for survival and we can not afford to let it be taken away from us. For this reason, we ask you to unite with us and each other to show solidarity with the poor and marginalized.

We, the homeless people and the supporters standing side by side, made the following statement demanding the government to stop evicting the homeless people in the area. We hope to gather as many supporters as possible, and submit the statement to the government along with the list of supporters. If you agree to support this cause, please provide us with the following information. If you do not wish to disclose your name, please indicate so.

Stop the forced eviction! Demand a halt to MLIT's violent eviction of homeless people! A petition against MLIT's “Sumida nature conservancy” project in the Arakawa riverside area, near Horikiri Bridge

Currently about 20 homeless people are living in the tents and huts in the Arakawa riverside area near Horikiri Bridge. They have lost jobs and houses, and have no other option but to eke out a livelihood while securing a living space in public. MLIT is now conducting two public works projects named “Sumida nature conservancy” and “Onagigawa weeding and maintenance”. However, as we will explain, these projects are essentially intended to evict the homeless people residing in the area, while intentionally ignoring the hardships of their precarious existence. As part of these public works projects large dump trucks and heavy machineries are brought right by their tents. This raises serious concerns regarding human rights and safety of the homeless people. We demand that MLIT halt these projects immediately, and consider an alternative plan. In what follows, we explain four main reasons
for this demand.

---MLIT ordered the evacuation of the area with no consultation with residing homeless people.---

In August, MLIT distributed a warning notice to homeless people, ordering them to vacate from the area by the end of September due to the public works projects starting in October. At that time, none of
the homeless people residing in the area received any sort of explanation pertaining to the projects, and it was not until September 12th that we first held a public meeting with the officials from MLIT in response to our demand. One of the series of questions and concerns that we raised to MLIT was where the evicted could live afterward. The ignorant responses by MLIT were: “this is an illegal occupation,” “it is prohibited to live in the river bank area” or “what do you think?” The officials showed no consideration for the life and well-being of the disenfranchised. MLIT officials dismissively asked us to “go to the office of public welfare”, but this statement reveals a complete lack of understanding of the fact that the current Japanese system of welfare programs is a total failure in terms of safeguarding the basic human rights and welfare of homeless people. Article 11 of t
he International Covenant on Economic, Social and Cultural Rights (United Nations Treatise on Human Rights), which Japan ratified in 1979, recognizes the rights of all humans to an adequate standard of living, including adequate housing. To ensure these rights, it is understood that no one ought to be forcefully evicted without 1) effective and sufficient consultations with the interested parties, and 2) provision of appropriate and sufficient alternative measures. In other words, it guarantees those who suffer eviction the access to appropriate measures, particularly the rights to alternative living space in order to secure an adequate living, and to assure the economic activities where they reside. The actions taken by MLIT are violations of these basic principles of human rights, and should be legally recognized as such.

---MLIT's planning and execution of public works projects reveal a strong prejudice and discrimination against the homeless.---

At the meeting on September 12th, MLIT explained that the projects in question are intended to maintain a nature park to conserve waterfront flora and fauna, such as reed. At that moment, there were 48 homeless people living in the affected area. Yet, the officials repeatedly made statements that ignored basic human rights of the homeless people, and even our own right to existence. Such remarks include “we do not consider the lives of the people living in the area in executing these projects” or “we are concerned with reed and other natural phenomena, but not the homeless.” The officials also maintained that local citizens (with homes), local governments, and academia are demanding the “elimination of homeless" and the “crackdown on illegal occupations through environmental adjustment”, while complaining that “we cannot go for walk in the park because there are homeless people t
here.” We strongly believe that such remarks reveal a strong prejudice and discrimination against the poor and the disenfranchised. The government should, if anything, try to prevent the reproduction of such cultures of bigotry. Instead, they are busy implementing public works projects using tremendous amounts of tax money based on these discriminatory ideas and culture. This is totally unacceptable.

---The officials are endangering the safety of the homeless people in the process of implementing the projects.---

MLIT started weeding grasses and bushes in the area before we even had a first meeting in September. Such measures exposed the private living spaces of homeless to the eyes of many passersby. In October they started removing vacant tents and cutting down trees. Heavy machinery is operated and dump trucks are passing by right next to the tents of homeless people, creating an extremely dangerous environment for them.
Furthermore, the officials has surrounded the area with fences to block free entry. The officials’ comment on this was once again threatening; “Get out of here if you do not want to feel endangered.” Before the projects started, there were friendly interactions between the homeless people and other citizens, adults and children alike. There were some children who used to attack the homeless people, yet through live interactions and conversations, came to change the attitudes to befriend with the homeless. The riverside area provided the citizens, especially the children to dissolve the prejudice and the discrimination among them and deepen their understanding on the poverty as a social problem. However, the projects that MLIT conduct not only endanger the lives of the homeless people, but also completely shut such learning opportunities that are very important for the communities and
the society as a whole.

---Nature conservancy is a hollow excuse for the public works projects, which are destroying the coexistence of human beings and the natural environment.---

The large number of cats living in the area were abandoned by residents of nearby neighborhoods, and the homeless people living here are caring for these cats at their own, personal cost. These cats have been sterilized thanks to volunteers from animal protection groups, and there is no worry that they may breed with out of control. Despite this coexistence, now both the homeless people and the cats are becoming victims of the MLIT projects. MLIT staff claim that the projects will conserve “biodiversity” in the area. However, real “biodiversity” is intimately related to "human diversity", where international society recognizes the importance of a society inclusive of the poor and marginalized. During the meeting on September 12th, MLIT admitted that it has not conducted any biological survey in the area. It is now obvious that MLIT makes no actual consideration of nature conservancy,
not to mention the lives of the poor.

For these reasons, we strongly urge MLIT to halt and reconsider the public works projects mentioned above. Many of the homeless people here used to be day-laborers in Sanya (a typical day laborer’s town in Tokyo) and worked with the constructions of dams, highways and buildings across all over the country. They were the ones who built the social and economic infrastructure; the foundations of the Japanese economy in the era of rapid economic growth. The Japanese government, as a part of its economic policy, gathered day laborers from poor rural regions and for a long period of time left them to work without decent labor rights and stable livelihood. Now, they are living as homeless. It is the government that made use of these now homeless people when needed, only to dispose of them afterwards. The tents in the river banks are the last shelter that the homeless people had secured on thei
r own to survive. The government should assume responsibility for the poverty, created through its economic policies, and now rampant throughout our society. Instead, it is trying to hide the problem from the sights of citizens through excluding the already displaced and disenfranchised from society, and destroying their lives. We strongly urge MLIT to recognize its obligation to secure basic human rights and well-being for the homeless, and seriously reconsider the their approach to the projects. 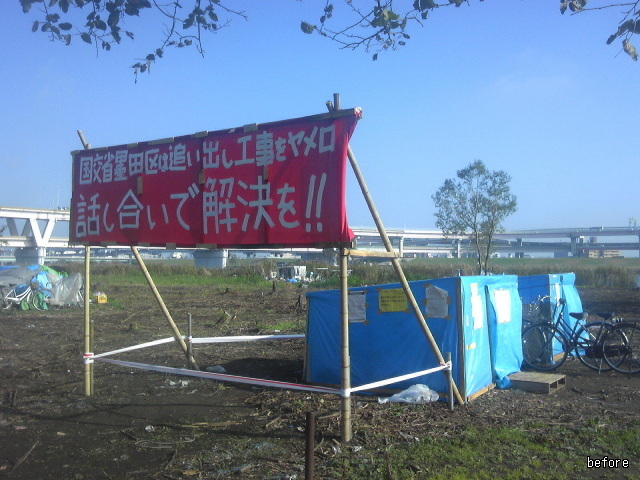